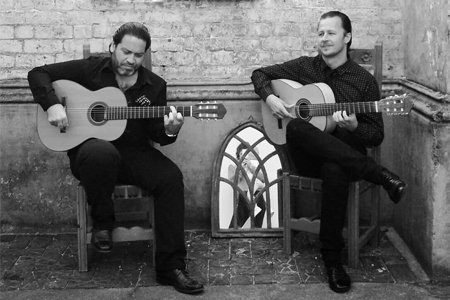 The Tanks Arts Centre – one of the best venues in Cairns for live music and shows – is just a 20-minute drive from our Cairns holiday accommodation on Trinity Beach. Book with us this May and you can enjoy a choice of two exciting live shows as you soak up the warm autumn weather on beautiful Trinity Beach, Cairns.

Paco Lara has been playing flamenco guitar since the tender age of 16, and is now performing internationally with numerous well-received recordings under his belt. Damian Wright is one of Australia’s most famous flamenco guitarists, who has performed at several Australian music festivals as well as to a sold-out crowd at the Sydney Opera House.

Guitarra Flamenca – World Music will see these two critically acclaimed performers together on stage for an unmissable display of world-class flamenco showmanship. Don’t miss it at the Tanks Arts Centre on Friday, May 3.

Bestselling nine-piece funk group The Bamboos, who hail from Melbourne, will come all the way to Cairns to perform at the iconic Tank Arts Centre.

Known for their soul-driven funk songs such as “The Wilhelm Scream”, “On the Sly”, “I Got Burned”, “You Ain’t No Good” and more, The Bamboos are one of the country’s catchiest funk bands, who have released eight albums and a whole host of singles since their formation nearly 20 years ago.

For fans in Far North Queensland and the surrounding regions, their upcoming performance at the Tank Arts Centre is not to be missed on Friday, May 17.

Find more information on Marlin Cove Resort near the Tanks Arts Centre by just clicking on our Trinity Beach accommodation.